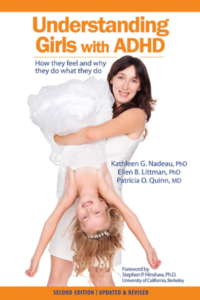 As we’ve written about throughout Understanding Girls with ADHD, girls with ADHD are often overlooked and misunderstood. This questionnaire can be used to support girls, many of whom have been working hard to hide their struggles, by giving them a voice. We developed the following checklist to allow girls the opportunity to tell us about their internal experience of living with ADHD.

Most ADHD rating scales primarily fo­cus upon observable behaviors as reported by others (parents and teachers). Because so many experiences of ADHD are “internalized” for girls, we can only become fully aware of the issues with which they struggle by asking them directly. This questionnaire is unique among ADHD questionnaires in offering girls an opportunity to directly self-report rather than relying upon parents and/or teachers to recognize their ADHD challenges.

This questionnaire was first developed in 1999, however, only recently has the importance of self-report questionnaires for girls with ADHD been recognized.  In a 2013 study of gender differences ¹, the most notable difference was greater anxiety in girls compared to boys. This anxiety was self-reported by girls, but not by their parents. Instead, parents mentioned somatic complaints, an outward manifestation of anxiety, without attributing these symptoms to anxiety. The authors of this study emphasize the importance of self-report scales in order to assess the internalizing problems that are especially salient in females with ADHD. We are very pleased that others in the ADHD field are starting to recognize the importance of self-report, particularly in studies exploring gender differences in ADHD.

This questionnaire is meant as a screening device, not a diagnostic tool. A girl’s answers to this questionnaire should become prompts for further discussion. After this checklist is completed it should be reviewed with the girl by a parent, teacher or other professional. We find that reviewing responses to this questionnaire usually leads to a discussion of important issues that may not have been discussed before. This questionnaire gives girls a structured way that they can begin to express their feelings and to describe their struggles – the first step toward finding help and support for ADHD.