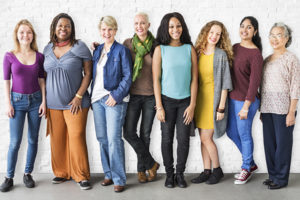 For decades the great majority of writing and research on ADHD focused on males, and the majority of children referred to clinics for ADHD evaluations were boys. In the mid-1990s, interest slowly began to develop about girls and women with ADHD. The first book on women with ADHD, Women with ADHD by Sari Solden, was published in 1995 and the first book about girls, Understanding Girls with AD/HD by Kathleen Nadeau, Ph.D., Patricia Quinn, MD and Ellen Littman, Ph.D. was published four years later in 1999.

Interestingly, as soon as adult ADHD clinics began to develop in the mid-1990s, they began to report a much higher female to male ratio than child-focused ADHD clinics had traditionally reported. Women were able to seek treatment independently, while girls had to depend upon teachers and parents to refer them for diagnosis and treatment. And many of these women diagnosed with ADHD for the first time in their late 30s or later, related that they had sought treatment for years and most had been diagnosed with depression rather than ADHD.

Although diagnosis of women and girls with ADHD is more commonplace today, women continue to face barriers to accurate diagnosis. Few psychiatrists have received training in the diagnosis of women with ADHD. Because the majority of women with ADHD have a coexisting disorder such as anxiety, depression or bipolar disorder, their struggles are often attributed to their coexisting condition, while ADHD is overlooked and untreated. Another barrier to ADHD diagnosis faced by women is that most lack clear signs of ADHD in childhood. The current diagnostic guidelines require evidence of ADHD prior to the age of 7 in order to make a diagnosis. Because girls with ADHD are less likely to have been hyperactive, disruptive or defiant, they are less likely to have been identified with ADHD-related issues in early childhood. New ADHD guidelines, to be published in 2014, do not require symptoms in early childhood. Until then, many women must overcome this barrier to diagnosis.

Self-blame — internalizing the criticisms of others

For a woman with ADHD her most painful challenge may be a struggle with her own overwhelming sense of inadequacy in fulfilling the roles she feels are expected of her by her family and by society. Girls are raised to “internalize” — to take in and own negative feedback — to apologize, to accommodate, not to fight back, to take the blame. Boys, however, are typically raised to “externalize” — to fight when attacked, to see the problem as outside of themselves. These differences are described very tellingly in Sari Solden’s book, Women with ADHD, in which she writes of “coming out of the ADHD closet” of shame and self-blame.

The hormonal fluctuations that commence at puberty continue to play a strong role the lives of women with ADHD. The problems they experience due to ADHD are greatly exacerbated by their monthly hormonal fluctuations. Some women report that the stresses of being the primary parent of children with ADHD while attempting to struggle with their own ADHD reaches crisis proportions on a monthly basis as they go through their premenstrual phase, often lasting as long as a week. Although the number of older women yet identified with ADHD is small, it seems quite reasonable to assume that the hormonal changes associated with menopause would be expected to, once again, to exacerbate ADHD symptoms of emotional reactivity.

In addition to contributing to PMS. research has shown that low estrogen levels are also responsible for impaired cognitive functioning including poor auditory memory and word retrieval. These cognitive impairments coupled with the poor executive functioning seen in ADHD may become the precipitating factor for referral of older women who previously were able to maintain a functional level prior to the low estrogen state associated with peri-menopause.

Being the support system instead of having one

Both on the job and at home, women are often placed in the role of caretakers. While men with ADHD are typically advised to build a support system around themselves, not only do few women have access to such a support system, society had traditionally expected women to be the support system.

The struggles for women with ADHD have been intensified with the emergence of “dual career couples.” During much of the past two decades more and more women have been required to not only fulfill most if not all of the more traditional roles of wife and mother, but also to function efficiently and tirelessly as they juggle the demands of a full time career.

Divorce rates are close to fifty percent among all marriages in the United States. Divorce becomes even more likely when ADHD is added to the list of marital stressors. Following divorce, it continues to be predominantly the mothers who are left as primary parent for children. By adding ADHD to the huge burden of single-parenting, the result is chronic exhaustion, emotional depletion and often overwhelming chaos as a woman with ADHD is required to juggle a set of responsibilities that are extreme for any adult, much less one with ADHD.

Neglecting themselves while focusing on their children

Just as the standard instructions on airplanes tell adults to put their own oxygen mask in place before assisting their child, a woman with ADHD should focus on treatment for herself if she hopes to be the best mother she can be for her child. Helping children function better with ADHD requires the full participation of their parent in learning and consistently using good parenting techniques, in creating routines within the home, and in teaching the child to look at his ADHD in a positive, constructive problem-solving manner. As a result, the best way that a mother with ADHD can help her child is to obtain treatment and education about ADHD herself.