Reducing the Impact of Divorce upon Children with ADHD 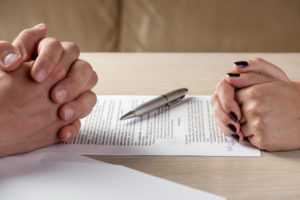 Studies show that marriages in which one or both partners have ADHD are more than twice as likely to divorce and had briefer marriages prior to divorce.

The stresses experienced by dysfunctional marriages in which one spouse has ADHD often include:

-Poor communication, with the ADHD partner having a strong tendency to interrupt and to lead the conversation down alternate paths rather than sticking to the original topic.

-Lack of emotional control reflected in arguments that tend rapidly escalate into yelling and blaming rather than engaging in communicating and problem-solving.

-Lack of consistency as a parent — the ADHD partner often fails to enforce rules with children, including failure to enforce bedtime, bath time, homework and chores.

-Imbalance in responsibilities within the marriage, where the non-ADHD partner taking on most of the burden for household management, meal preparation and child care.

-Forgetfulness that leads the non-ADHD partner to feel that they cannot ever depend upon their partner to complete tasks, remember commitments, or even remember that important topics have been discussed.

-Poor money management and impulsive spending patterns in the partner with ADHD.

-Criticism, controlling behavior and disparaging comments on the part of the non-ADHD partner

In dysfunctional marriages where both spouses have ADHD, a chaotic home life is often the norm.

-Communication is poor, and often more volatile than communication between partners where only one has ADHD.Both partners exhibit poor emotional control, resulting in verbally violent arguments that can be very traumatic for children in the home.

-Both parents tend to lack consistency in their parenting and may resort to blaming one another for the inconsistency rather than working together to resolve the problem.

-Households are often cluttered and chaotic as neither parent takes charge of consistently performing household tasks.

-Both partners struggle with forgetfulness, sometimes leaving a child to fend for himself, for example, if neither parent arrives on time for an after-school pick-up.

-Poor money-management is a common issue often leading to poor credit ratings and even bankruptcy.

What’s more, parents with ADHD are very likely to have one or more children with ADHD that tend to be much more challenging to raise than non-ADHD children. Because adults with ADHD have a greater chance of being under-employed or having periods of unemployment, post-divorce financial stresses are often high.

Children with ADHD often have academic and behavioral problems when they live in an intact family. These children tend to be hyper-sensitive to family stress, which leads them to be even more likely to struggle both emotionally and academically following a divorce.

One common post-divorce issue occurs when parents disagree about a child’s ADHD diagnosis or about appropriate treatment. Sometimes this results in a parent refusing to allow their child to take prescribed medication for ADHD when the child is visiting their home. Sometimes this negative parental attitude will influence a child to deny his ADHD diagnosis and refuse treatment that may have been helpful before it was discontinued.

Home environments are very important to helping a child reduce ADHD symptoms. If separated or divorced parents can agree upon basic issues such as privileges, rules, and routines, it will be much more beneficial for the child with ADHD. Unfortunately, many couples that experienced conflict during the marriage continue to argue and resist one another following a divorce. Often, the parent with ADHD resents it when their ex-spouse “tries to tell me what to do.” They may express that this was the pattern within the marriage and they are determined not to allow an ex-spouse to instruct them in how to parent their child following the divorce. Sadly, the child is the one that suffers most when parents cannot agree and cooperate.

Frequent shifts from one parent’s home to the other’s are disruptive for all children, but are especially disruptive for a child with ADHD who has difficulty keeping on track and following routines within a single stable environment. When the child must now remember where she will be sleeping on which night of the week and make sure that she has all of the items of clothing, school-related items, and sports equipment on hand as needed, her stress is even higher. She may dread triggering yet another argument between her divorced parents because one parent or the other forgot some important item or event.

Parents that engage in divorce mediation rather than divorce litigation are more likely to be able to reach agreements that are in the best interest of their child with ADHD.

-Household routines should be consistent from one home to another, and should also be developed based on the needs of the child — needs for homework supervision, needs to participate in after-school activities, needs for a consistent bedtime that allows a child to get adequate sleep each night.

-Keeping the goal of stability for the child in mind when making all decisions. For example, some divorcing couples agree to postpone the sale of the family house in order to allow the children to remain in their home, school and familiar neighborhood for a number of years following a divorce.

ADHD-focused couples counseling holds the potential to save a marriage by helping couples to better understand the impact of ADHD upon their relationship and begin to communicate and problem-solve to reduce the myriad problems that they are facing. ADHD-focused solution-oriented counseling can still be helpful when a couple is in the process of a divorce, or even post-divorce.

The more that parents can work together to support the needs of their child with ADHD, the more likely their child can receive the help and support that he needs to build self-esteem, reduce the stress and anxiety resulting from the divorce, and begin to focus on academic success and positive peer relationships.