How to Avoid Avoidance 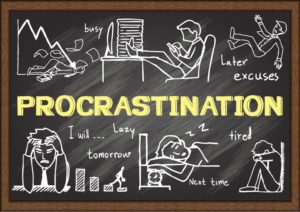 “I mean to do it, but I just keep putting it off!” “I started to study, but before I knew it I was on Facebook.” “I know I need to dig out my closets, but there never seems to be enough time.” “I dread paying my bills. It makes me so anxious that I find a million other things to do instead.”

If any of this sounds like you, you are one of the many individuals with ADHD that struggle daily with avoidance tendencies. Sure, everyone avoids tasks they don’t like. But it’s a matter of degree. If your avoidance patterns have big consequences — like failing courses, getting a bad credit rating, or living in chaos, then it’s time to tackle your avoidance patterns. If you want a life that works for you, you’ve got to find a way to get around to doing those difficult or disagreeable tasks.

Here are a few strategies to begin to tackle your avoidance patterns:

One bite at a time. Break the task down into small bites that don’t feel so disagreeable. For example, if you can’t get yourself to reorganize your entire closet, tackle things one shelf at a time. If you can’t get started on writing your paper, give yourself the task of just writing the introductory paragraph. Once that is done, you’ll find the second paragraph is easier.

Misery loves company. Need to work on your taxes, your paperwork, your class assignment? You’re more likely to get on task and stay on task if someone is with you, either working on a similar task, or providing you the support to stay focused.

Lead us not into temptation! When trying to do a distasteful task, do it in a place or at a time when you are not surrounded by tempting alternative activities such as TV, internet, socializing, eating, video games, etc. It’s hard enough to do a difficult task without also having to avoid the nearby temptations of more pleasant activities.

Get off the internet! The internet provides so many tempting alternatives to undesirable tasks that it deserves a category of its own. Some individuals with ADHD find the internet so alluring that their only solution is to disable internet accessibility on a computer reserved for difficult tasks. Can’t do it? Tell yourself that you need access to the internet for “research”? Then do your research online when you are in the company of others so that you are unlikely to “play” online instead of doing research.

Avoid being overwhelmed. Many tasks are avoided because they are very demanding to us. Those with ADHD frequently experience a feeling of overwhelm that shuts down productive functioning. Overwhelm can be caused by trying to accomplish a large, complex task in one sitting. Overwhelm can also be created by taking on a large organizing projects. For example, dragging everything out of a large closet or storage area often leads to feeling overwhelmed and unable to efficiently sort, discard and store belongings.

Reduce anxiety. Often we avoid tasks because they make us feel anxious. We don’t balance our checkbook because we fear the results. We don’t start working on a paper because we’re not sure how to start.

Don’t engage in “justifiable procrastination” People with ADHD are experts in finding reasons to delay disagreeable tasks. Often, they will find “justifiable” reasons not to begin, such as spending hours creating the perfect graph or chart rather than starting to write their paper; or researching online for hours for the perfect device or resource they convince themselves is needed to perform the task. Instead, dive in and begin.

Make it fun! Try to think of a way to make the task into a game or competition that you do with others. One very creative group of women with ADHD formed an online support group. Each week at the same time they came online together, announced the “dreaded task of the week” to one another, immediately got offline and tackled the task, and then reconvened online an hour later to laugh and celebrate “mission accomplished!”

Reward yourself frequently, after you’ve accomplished something. Instead of lying on the couch surfing the web or watching your favorite rerun, use these activities as a reward after you have worked for an hour or so. Be sure that your rewards aren’t so engaging that you never return to your task.

Hang out with the right people. One of the most important ways to avoid avoidance is to avoid people that encourage avoidance. If your friends or family members support or encourage your avoidance behavior, you need to actively seek out the company of people that will help you stay on track. If you are in school, hang out with people that actually study.

Don’t rely on “willpower” or “self-discipline”. Make it as easy as possible to “do the right thing” and as difficult as possible to fall into avoidance. Problem-solve. Identify what’s getting in your way. Maybe you’re chronically tired and need more sleep. Maybe you’re surrounded by other avoiders. Maybe you’re surrounded by temptations that make it much harder than it needs to be to stay on task. Don’t just blame yourself and feel defeated — problem solve and stay on track.