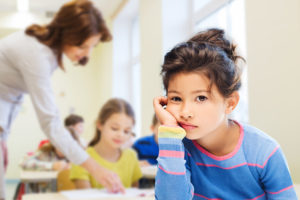 We’ve come a long way since our earlier belief that ADHD (ADD) only affected boys and a handful of girls. The first book on girls with ADD was published in 1999, Understanding Girls with AD/HD, co-authored by Chesapeake Center Director Kathleen Nadeau, Ph.D. This landmark book helped to trigger an explosion of awareness of girls with ADHD (ADD) who had been overlooked or misunderstood. Today, the diagnosis of girls has become much more commonplace, although research still tells us that boys are more likely to be referred for diagnosis and treatment than girls. Some experts now predict that in the near future it will be widely recognized that ADHD is an equal opportunity condition that affects as many girls as boys.

For now, the reality is that many females — both girls and women — still suffer from undiagnosed ADHD (ADD). One reason for this is the “squeaking wheel” problem — that teachers are more likely to refer students for evaluation when they cause significant problems for the teacher in the classroom. Studies show that girls with ADHD are much more compliant than boys. While boys may argue with or openly defy their teacher, such behavior is rare among girls with ADHD. In fact, many girls stay “under the radar” because they work so hard to try to comply with their teacher’s expectations. Girls, for example, may look directly at their teacher, appearing to pay attention, while their minds are elsewhere. Girls are typically more concerned about completing assignments and may even become very anxious about school, fearing that they will “be in trouble” if they don’t keep up. More girls than boys fall into the “inattentive” category of ADHD, which means that their behavior is not at all disruptive in the classroom. Although many girls have difficulty with emotional regulation, often they hold in their feelings during the school day only to explode into tantrums and meltdowns.

Some research suggests that mothers are less able to accept ADHD symptoms in their daughters than in their sons, leading to a damaging pattern of negative mother-daughter relationships. Girls with ADHD have great difficulty living up to the expectations placed on girls to be more orderly, self-controlled, and aware of the intricacies of social interactions. Many girls with ADHD find themselves socially rejected or left out of the social group because of patterns of bossiness, impulsivity, overreacting or just not fitting in. These patterns of difficulty with their mothers and among their peers puts girls with untreated ADHD at great risk for low self-esteem, anxiety and depression as they move through their teenage years and into young adulthood.

Although girls may be less disruptive, they are no less impacted by ADHD than boys. It is important that girls receive early treatment, just as it is for boys. Girls ADHD symptoms often worsen at puberty when hormones begin to fluctuate at the same time that the demands for organization, planning, and independence increase in middle-school. Girls that go untreated are at much higher risk for cigarette smoking, academic under-performance, social problems, low self-esteem, and early sexual behaviors that put them at risk for STDs and teen pregnancy.

At the Chesapeake ADHD Center of Maryland, we have a very strong commitment to diagnosing and treating girls with ADHD (ADD), and in educating the mental health community so that when females (girls or women) seek assessment for ADHD (ADD) issues that their concerns are no longer minimized or explained away as symptoms of anxiety or depression.