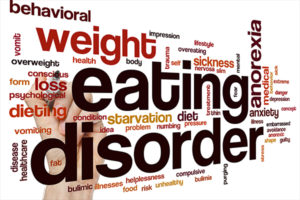 Although little research has been conducted, there is increasing evidence that eating disorders are associated with ADHD, especially in females.

As is true in the general population, anorexia is more common in young women than in older females with ADHD. Low self-esteem, so common in young females with ADHD, combined with being overweight increases feelings of inadequacy experienced by many young females. When treated for ADHD, some young women experience loss of appetite that can be associated with stimulant medication prescribed for ADHD. Appetite suppression results in rapid weight loss, and often for the first time, these girls feel attractive. As the medication side effect of appetite loss typically decreases, some of these young women develop anorexic patterns of severe food restriction in a desperate attempt to maintain their weight loss. Young women with ADHD at the hyperactive end of the ADHD continuum may also develop compulsive exercise patterns to maintain their medication-induced weight loss.

Binge eating is a more common disordered eating pattern among females with ADHD — often in response to anxiety or stress — which may develop into bulimia — a pattern of binging and purging through self-induced vomiting as they attempt to avoid weight gain. Other young women begin to abuse laxatives in an effort to avoid the weight gain they fear after periods of binge eating.

Women in their 30′s and beyond often report patterns of using food as an immediate reward during a stressful day or to calm themselves at the end of the day. Many women report eating sweets or starchy snacks late in the evening which creates a temporary feeling of calmness that helps them lower stress levels.

Many women with ADHD have patterns of yo-yo dieting — in which they engage in severe calorie restriction for a period of weeks, losing weight rapidly, only to engage in compulsive over-eating in response to the food deprivation they have imposed on themselves.

Although all adults tend to have difficulty following dietary plans on a long-term basis, recent studies suggest that adults with undiagnosed, untreated ADHD have even greater difficulty benefiting from weight loss programs.

At Chesapeake we have a particular interest in working with adults with ADHD who struggle with disordered eating. We help adults to develop ADD-friendly healthy eating patterns that are easier to follow. We also work with them to learn to recognize the feelings, situations and foods that tend to trigger binging or compulsive over-eating and develop ways to reduce or avoid them.

Pieces of a Puzzle: The Link Between Eating Disorders and ADD (for sale at ADDvance.com)