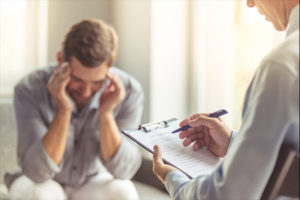 ADHD rarely occurs in isolation and the likelihood of coexisting conditions increases as an individual with ADHD moves through adolescence and into adulthood. Recently, Tom Brown, Ph.D., psychology professor at Yale and internationally recognized authority on ADHD, has proposed that ADHD is a “foundational disorder” — a disorder that creates a vulnerability toward a host of other psychiatric conditions in adolescence and adulthood, especially when ADHD goes unrecognized and untreated. In adulthood, over 70% of those with ADHD also have another significant psychiatric condition that should be addressed when treating ADHD. Anxiety and depression are two of the most common coexisting conditions.

Up to 30% of children with ADHD and nearly 50% of adults also struggle with significant symptoms of depression. Joseph Biederman, MD, a pre-eminent ADHD researcher and psychiatrist associated with Harvard University describes depressive symptoms in children as “demoralization” rather than true depression. By “demoralization” he means that these children feel demoralized and discouraged due to frequent failures and frequent criticism as they have difficulty meeting the expectations of teachers, coaches and parents. The constant raining down of daily failures, frustrations and negative reactions from others has a more negative impact upon children with ADHD than the disorder itself. It is critical that parents understand this and work to make their home an ADHD-friendly safe haven from the daily negativity that these children experience out in the world.

As children become older, true depression seems to become more frequent. Some have noted a pattern among girls with ADHD in which depression tends to increase following puberty. Fluctuating hormonal levels, combined with pre-existing ADHD seem to combine, especially during the pre-menstrual period each month, to cause irritability and moodiness at a much higher level than among girls without ADHD. Biederman’s group at Harvard recently reported, however, that they find equal levels of depression among adolescent males and females.

In adulthood, up to 50% of adults struggle with significant symptoms of depression. In fact, among women, whose ADHD is more likely to be overlooked, the most common psychiatric diagnosis that they have received prior to their ADHD diagnosis is that of depression. While this may not have been an inaccurate diagnosis, it was an incomplete one.

What is less well understood is how to treat these co-occurring conditions. Many psychiatrists fear that stimulants may trigger a hypomanic or manic episode and are reluctant to treat ADHD using stimulant medications. Others, however, have demonstrated that it is quite possible to treat these two commonly co-occurring conditions simultaneously, first treating the bipolar disorder to stabilize the patient and then addressing their ADHD with stimulant medication.

In adults, bipolar disorder is diagnosed in individuals that have had at least one episode of mania (a period during which the individual feels energetic, even euphoric, and has a markedly reduced need for sleep. During such a manic episode, the individual may behave in an impulsive, poorly controlled fashion that is out of character with her normal behavior — for example, making sudden dramatic decisions (to change jobs, to leave a marriage, to suddenly take off on an unplanned and ill-conceived journey), to develop unrealistic plans or to spend money excessively. While some adults swing from periods of mania to periods of depression, other adults are more likely to move in and out of depression with only a single period of mania.

In younger people bipolar disorder may present very differently. Children may have big mood swings, precipitated by little or nothing, may have extreme irritability and become wildly explosive. It is very important that a child’s ADHD not be ignored by a physician that is over-focused on bipolar symptoms. Helping stabilize a child’s moods as well as helping her focus and be able to perform well at school and in daily life are both important to future success.

Nearly one third of children with ADHD suffer from anxiety that is often overlooked by parents or interpreted as shyness or lack of confidence. Living with ADHD is highly stressful for many children. They may develop pervasive feelings of anxiety. Some children develop patterns of school phobia, complaining of stomach aches or other issues in order to avoid the stress of the school day. Anxiety is also generated by the social rejection that many children with ADHD, especially girls, experience. Not all anxiety is the result of ADHD. Anxiety disorders including Generalized Anxiety Disorder and Obsessive Compulsive Disorder can exist as a co-morbid condition.

Anxiety and ADHD can be easily treated together. It is important for parents to be aware that children with untreated anxiety may respond very poorly to stimulant medication because it increases their feelings of anxiety. Children and adults whose anxiety is treated, however, are usually able to respond well to stimulants and to benefit from them.

Anxiety, depression and bipolar disorder are very commonly found in children and adults with ADHD. It is critical that a careful assessment take place in order to develop an appropriate, effective treatment plan that addresses ADHD in addition to coexisting anxiety or mood disorders. ADHD treatment is unlikely to be successful if anxiety or mood disorders go untreated.

At the Chesapeake Center, we assess each individual that comes to us — not only exploring the possibility that ADHD is present, but also exploring the possible presence of an accompanying anxiety or mood disorder. We will work with you and your prescribing physician to help develop the best treatment regimen, and also help our clients to engage in lifestyle changes addressing nutrition, sleep, exercise, light therapy and stress reduction needs that can be very effective in reducing symptoms of anxiety and depression.