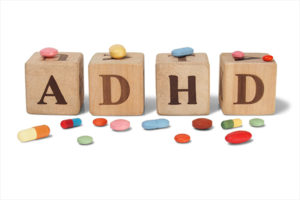 For a number of years, methylphenidate was available only as Ritalin with a duration of action (length of time its beneficial clinical effects can be observed) of approximately 3-4 hours. Because of this short half-life, methylphenidate required multiple daily doses to obtain clinical benefits throughout the day. Recently, a number of other methylphenidate products have become available (e.g., Concerta, Metadate CD , Methylin ER, Ritalin LA, Focalin XR, and Daytrana) that require only once daily dosing to address ADHD symptoms throughout the day. These products use different delivery systems (including the patch technology of Daytrana) that allow for a slow release of medication throughout the day and have been shown to have pharmacological and clinical profiles comparable to twice a day (b.i.d) or three times a day (t.i.d.) dosing with typically formulated methylphenidate. To date, there is little evidence to support the superiority of any one of the once-daily products over the others.

All of these medications are trade names for products whose active component is some form of amphetamine. Dexedrine, which has been available for a number of years, is equally effective as methylphenidate for a number of problems associated with ADHD, but is not prescribed as frequently. Adderall and AdderallXR are the trade names for a generic compound of mixed amphetamine salts (three forms of d-amphetamine and one of l-amphetamine). Adderall XR has a much longer duration of action (e.g. 10-12 hours) and will available soon as an ever longer-acting formulation. Vyvanse is a newer formulation or prodrug containing a form of dexamphetamine. A prodrug is a therapeutically inactive precursor of a drug that is converted to the active form by a metabolic process that takes place in the body after it is ingested. Vyvanse is probably the longest-acting formulation of a stimulant on the market to date and has greatly reduced abuse potential since the drug is not active until it is broken down in the body.

The main side effects of stimulants are appetite suppression and insomnia. It appears, however, that these side effects are not as severe with the long-acting stimulants. In addition, long-acting stimulants are smoother reducing symptoms for many hours without the feeling that medication effects are starting and stopping throughout the day. This longer-duration may help the student address not only symptoms causing academic difficulties, but also those that can affect social and daily-living activities of adults with ADHD. Stimulants can cause mild increases in pulse and blood pressure and should not be used by individuals with known cardiac disorders or a family history of cardiac symptoms. Please consult your physician regarding these potentially lethal complications before starting on a stimulant.

To date, there have been no controlled studies looking at the effects of stimulant use during pregnancy. There have been a few animal studies reporting cardiac defects at high doses of amphetamines and individual case reports of use of both amphetamines and methylphenidate by mothers during their pregnancies without harm to the fetus. However, at this time, looking at all the available evidence, the prevailing recommendations is that stimulants should be used during pregnancy only when the potential benefits to the mother outweigh any risk to the fetus. Therefore, a woman considering pregnancy should discuss her continued medication use with her prescribing physician.

Strattera is a selective norepinephrine reuptaker inhibitor, which is indicated for the treatment of ADHD in children, adolescents, and adults. The mode of action of Strattera in the treatment of ADHD is currently not known. However, it is the only medication that affects the regulation of norepinephine by acting as a potent inhibitor of the presynaptic norepinerhrine transporter. It is not associated with an appreciable abuse potential and is not a controlled substance. Strattera is recommended to be administered as a single daily dose in the am or pm with effects lasting until the next dose. It may be administered with or without food. Although, some evidence indicates that taking with food decreases gastrointestinal side effects. Side effects include initial weight loss, gastrointestinal distress, somnolence, and some dizziness. Recent studies have found this medication effective in reducing both the symptoms of ADHD and coexisting anxiety.

Clonidine and guanfacine, alpha-2A adrenergic agonists, have also been used off-label in the management of children with attention-deficit/hyperactivity disorder (ADHD) for more than a decade. Guanfacine is preferred by many for its longer duration of action. A new extended-release formulation of guanfacine is currently under review by the Food and Drug Administration (FDA) specifically for the treatment of ADHD in children between 6 and 17 years of age.

The following table lists the current medications used to treat ADHD, their relative duration of action, and the website (if available) to obtain more information about them.

This article was written by Patricia O. Quinn, MD, Director, Center for Girls and Women with ADHD.